Oaks have long-been a quintessential feature in California landscapes. From rolling hills to rivers, public parks to home gardens, it is one of the most popular trees in the state. In recent years, however, their population has been in peril as a result of different oak tree diseases California. Live oak tree diseases affect almost all parts of the tree from the root to the acorns. To prevent the death of the tree, knowledge of these diseases is important, and that is what we are here for!

Out of all the most common diseases affecting oak in California, this is one of the most serious. Some of the signs and symptoms include leaf spots, twig dieback, and bark cankers. Despite having oak in its name, the same disease can also affect bay laurel, pepperwood, coast redwood, and Douglas fir, among other trees and shrubs.

The sudden oak death is caused by a water mold pathogen called Phytophthora ramorum, which is the same pathogen responsible for ramorum leaf blight and Phytophthora canker disease.

Unfortunately, there is currently no known treatment for the sudden oak death. Using a fungicide can help to minimize the symptoms, but it won’t completely heal the condition. The best thing to do is to engage in preventive measures, which include creating a barrier to separate the affected oaks.

Also called oak leaf curl, this disease causes a circular and raised area that can occupy up to two inches of the upper leaf. Light green bulges will also appear and defoliation will gradually happen. This is common in emerging leaves and not a problem for those older.

The causal agent of the oak leaf blister is a fungus known as Taphrina caerulescens. It has spores that overwinter on the bud and will spread to the developing leaves once the environmental condition is favorable. It favors moist and cool conditions.

While it does not affect the tree’s overall health, it significantly impacts aesthetics. Chemical treatment is not recommended. Like other live oak tree diseases, prevention is better than cure. A single fungicide application in spring is more than enough to protect the tree.

The most common signs of this oak tree disease include poor growth, yellow leaves, and eventual death. It also causes leaves to prematurely fall from the tree.

It is caused by the Armillaria fungi, which is a family of over 30 species. The most common causal agents are Armillaria mellea and Armillaria gallica. In winter, they spend time on the roots and can spread through the soil, affecting nearby oak trees.

Chemical treatments often focus on the soil to kill the fungus before it spreads to healthy trees. Tree removal California is another promising solution, which will eliminate the host. Proper disposal of the tree is crucial.

The most common symptom of this disease is the appearance of white spots that coat the leaves. Like many of the live tree oak diseases, it can also result in the distortion of leaves.

Powdery mildew in oak is caused by Erysiphe alphitoides. This is a common foliar pathogen that attacks young leaves. It invades the surface cells of the mature leaves, and in turn, causes a velvety appearance.

There is no treatment for powdery mildew, but there are several interventions that can prevent the disease. Spraying fungicides, for instance, will help to stop the pathogen from causing stunted growth. Planting resistant cultivars is also recommended. If you are planting nursery plants, ensure proper spacing for sufficient air circulation.

A condition more common in red than white oaks, it is a serious disease that causes an increase in mortality rates of trees in California and other states. It affects the conductive tissues of oak, which will eventually limit water uptake.

The main cause of the oak wilt is a pathogen called Bretziella fagacearum, which is common throughout North America. This fungal pathogen will plug the vessels of the tree, preventing the transport of the essential nutrients to the other parts.

One of the most common treatment options is the trunk injection of a systemic fungicide, which is best done in fall or spring. Similar to other serious oak tree diseases California, the removal of the infected oak is another logical solution. Frequent pruning will also help. Regardless, make sure that you throw the parts trimmed from the tree to avoid the fungus from spreading. 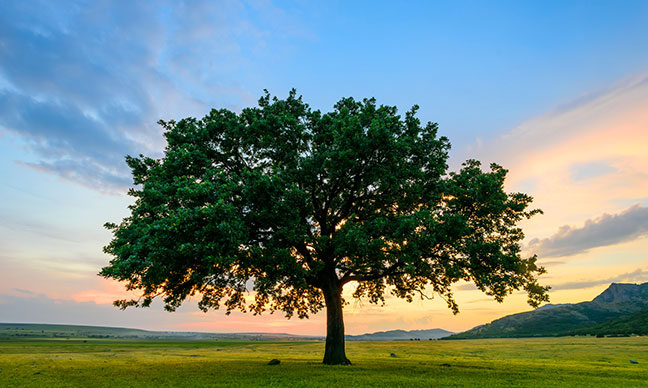 Q: What is killing oak trees in California?

A: Phytophthora ramorum is the most common pathogen killing oak trees in California. It is responsible for a disease informally called the Sudden Oak Death. Canker rots, oak mistletoe, hedgehog fungus, sulfur fungus, sunscald, bacterial leaf scorch, oak leaf blister, powdery mildew, and leaf spot are other problems that are killing oak trees in the state.

Q: How do I know if my oak tree is diseased?

A: Some of the most common signs of a diseased oak tree include brittle and brown bark, presence of deadwood, blotched leaves, dead branches, root rot, crusty spots, and weakened foundation, among other things.

A: Armillaria mellea, an oak root fungus, is one of the most common culprits for killing live oaks. It spreads to nearby tree roots. Taphrina caerulescens is another problem, which starts as a leaf blister and will eventually affect the overall health of the live oak.

Q: Can a dying oak tree be saved?

A: Yes, you can still save a dying oak. The best thing to do is to reduce stress and improve its living conditions. Water frequently and remove the dead parts. If you are unsure about what to do, professional providers of tree services California can save the day.

While oak is considered one of the best drought-tolerant trees California, it can be prone to problems. Without early intervention, oak tree diseases California can result in eventual death. Prevent this from happening by learning how to identify the causes and treatment.