Yews are handy plants that have been used to spruce up landscapes for centuries. They form gorgeous hedge screens, foundation plants, and single specimens, and require very little maintenance.

While there are about eight yew species that grow in the US, only two have been found to do well in Texas. In this post, we explore the Japanese plum yew and Japanese yew Texas tree species, the most popular yew varieties in the Lone Star State. Read on!

Japanese Plum Yew And Japanese Yew Texas Trees: What You Should Know

Most homeowners looking to introduce yew trees to their Texas property may want to know, “Do yew trees grow in Texas?” Yes, they do and Japanese plum yew and Japanese yew are the best varieties to plant in Texas.

Native to Japan, Korea, and northeastern China, the Japanese plum yew has been gracing gardens in Central Texas for almost 200 years and for a good reason; its stunning foliage and ease of maintenance. If you are looking for fruit trees to plant in Austin, this plant produces an extremely tasty olive-sized fruit too when mature, hence it could be a great addition to your yard.

Japanese plum yew has dark green needle-like leaves that make a beautiful backdrop for other plants in the garden. It is also evergreen, meaning, it will retain its dazzling green all year round.

The tree grows up to a height of 4 feet and spreads up to around 3 feet wide. You can grow it as a small tree, groundcover, or mid-sized shrub depending on the variety (cultivar).

When planted properly and in the right conditions, Japanese plum trees can be exceptionally easy to grow and care for. They prefer well-drained, neural to acidic soil and should be watered at least once a week and more frequently during dry seasons. And don’t worry about the tree getting enough sunlight; these trees will flourish even in the shadiest areas.

Before spring, apply a general-purpose fertilizer to enhance growth. Also, prune as needed to achieve your desired shape. You can do the pruning by yourself but for more demanding tasks like adding fertilizer or testing the soil PH before adding more trees to your garden, you would be better off hiring a professional tree pruning Texas service.

Generally, a Japanese plum yew is a great tree for Texas homes. The only downside is that it is very slow growing and can take up to 10 years to reach the 4 feet mark. It might, therefore, not be the best option for homeowners looking for fast growing trees. 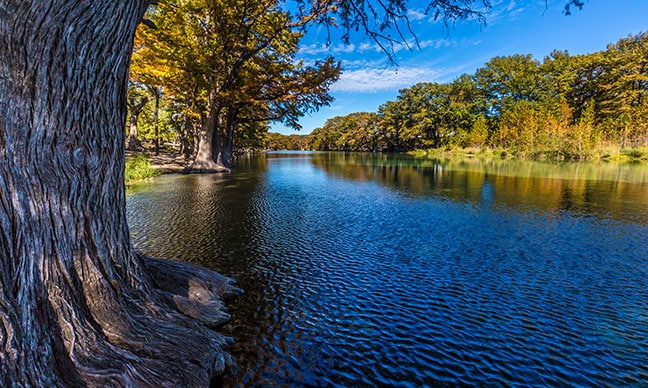 If you are looking for something taller, then the Japanese yew tree would be a great option. This tree is perfect for livening up Austin landscapes, thanks to the area’s, mild winters. Unlike Japanese plum yew, this one can grow up to 30 feet tall, making it a great shade tree for Austin homes. Japanese yews are also evergreen and make a nice foundation and accent plants. Their dark green foliage make a stunning background for colorful perennial and shrubs. Not forgetting the small, ornamental red fruits that add more glamor to the tree come spring.

Small Japanese yew varieties can be planted on a bank or slope to prevent soil erosion. Larger species make great specimen plants for patios and formal gardens. They can be sheared for a trim look or pruned slightly to maintain shape and size.

Japanese yew plants do well in light, acidic sandy soils; they will not survive in heavy clay soils that are not well drained. Modify the soil by adding manure, compost, or peat to enhance drainage.

And if you are wondering, “Will Japanese yew grow in shade?” Know this; all yews can tolerate deep shade provided they will receive some sun in the spring. Japanese yews are no different; however, they prefer full sun to moderate shade. In Texas and other places with hot summers, these trees will do best in an area with good morning sunlight and afternoon shade.

Spring would be the best time to plant a Japanese yew tree. Water young plants at least once a week as their roots become established and then twice a month after the first year. Water more frequently during dry seasons. Prune in summer to control the size of the shrub and get rid of dead branches.

Is Japanese Yew Poisonous To Dogs?

Yes, Japanese yew trees are poisonous to dogs, horses, cows, and many other animals. The seeds, leaves, and bark secrete a toxic substance that can be highly deadly to pets and other domesticated animals. The toxin acts as a self-defense mechanism to keep animals from eating the plant.

The only part of the tree that is not toxic is the flesh of the berry it produces. You can eat the fruit but first you have to strip the flesh carefully away from the toxic seed. This will help eliminate the possibility of biting into or swallowing the seed.

Yews do not experience major disease and pest problems like most trees in Texas do, but scale, mealybugs, and weevils can still give them trouble. Examine your trees regularly to make sure they are in tiptop condition. A good pesticide should be able to take care of most of these insect infestations.

Pruning is best done early in the spring before a new flush of growth. Trimming at this time ensures that the new growth is thick and healthy. And no, you don’t have to trim yews every year. However you should know that pruning at least once a year helps get rid of dead branches that hinder growth. It also prevents the tree from becoming too woody.

The secret to achieving the perfect scenery and landscape is planting the right combination of trees. Both Japanese plum yew and Japanese yew Texas tree varieties are perfect for homeowners looking for evergreen shrubs for hedges or hedge screens. They are easy to plant and care for. They are also extremely drought tolerant and can resist most tree diseases and pests experienced in Texas. Just make sure to take the necessary precautions when handling a yew tree to avoid ingesting the toxin secreted by its parts.