What Is Happening With Los Angeles Palm Trees?

The city of Los Angeles was just an area of a scrubland desert before 1875. However, during the next 50 years, Los Angeles palm trees would become a major transformative force in the development of the city. What is interesting about them is that they didn’t serve a purpose like other trees in the area. They didn’t prevent erosion, nor provided fruit, shade, or wood. LA palm trees became symbols of the city.

Related Posts: How To Plant A Palm Tree & How To Revive A Dying Palm Tree

The California fan palm is the only species of native palms to the entire state of California. It can be found in Los Angeles quite frequently, it is the big one with a fuzzy beard of brown leaves underneath its green fronds. Besides, it can be spotted easily around desert oases in the Colorado Desert.

Natives from the area used it pretty liberally; palm trees are very good for building due to their incredible strength and heaviness. Unfortunately, the West Coast was barren of these things until very recently, compared with the East Coast palms. Even residents weren’t sure what Los Angeles palm trees were – tall grass, plants, or trees?

What are Palms Exactly?

There are a lot of things that are interesting about palms, but number one on this is list is definitely that they are not trees. According to tree services California, the word “tree” is not a horticultural term. In addition to that, palms are not like other plants commonly referred to as trees, even though most of the population calls them that.

For example, palms don’t have wood at all. Their whole interior is made up of thousands of fibrous straws. This allows LA palm trees to bend during hard tropical windstorms without ever snapping or damaging in any way.

Additionally, they are monocots, which means that their seed contains only one embryonic leaf. Considering that palms are monocots, we can conclude that they have more in common with bamboo and corn than they do with pine or oak trees.

How did Palms get into LA?

Southern California didn’t have a lot of trees, as mentioned above. However, what the residents had is money and a lot of sunshine. Once the railroads were installed throughout the country, speculators realized that this sunny place would be a great opportunity to sell land. The only problem was making the people move to a desert.

This is where the palm trees played a huge part. At the time, palm trees were associated with the Middle East, Orient, or the Holy Land. They grow freely in these areas and this area had major religious associations of Western people. Palms are used in almost every religion, and this is the original reason why palms were planted in the New World too.

Catholic missionaries planted them around their missions in Florida and California since they were in a place with a hospitable climate for these trees. However, they are not responsible for the mass use of them in Los Angeles.

We mentioned above that palms are not like other trees. One reason for this is that they are very easy to move around: their root system is pretty simple and they have a small root ball. This makes them very easy to be dug up and transported. Also, palms only care that they have enough water and sun and they will thrive.

This fact allowed for palms to be integrated into Los Angeles forever – the city started planting palms systematically as street trees. This is something that no other city did at the time, and it attracted a lot of people to a world of cars and sunshine. Thousands of palm trees were planted, not just along boulevards, but everywhere.

What Palm Trees did for the LA?

Quickly after, LA palm trees quickly became the symbol of the city. Of course, the early planners of Los Angeles planted other non-native trees too. During this period, a lot of pepper trees, citrus trees, and eucalyptus were used, just to evoke the Mediterranean feel on the West Coast. Still, the palms were the ones that took off.

The palms thrived in Los Angeles without any problems. Residents even reported that they are used to seeing them grow in cracks in the asphalt. One species, in particular, grew enormous – the Mexican fan palm. This variety is native to Northern Mexico and has a very unique figure – tall and skinny. However, no one expected them to grow so tall in Los Angeles. Tree Service Los Angeles companies still don’t have an answer to why these palm trees grow taller in LA than in the wild.

For the most part, palms took off as a symbol of wealth, nice weather, vacation, and luxury. Because it is pretty easy to grow palms in containers, they were often found on luxury ships too – Lusitania and Titanic had palms on them. Fancy hotels, robber barons, and magnates planted them in “palm courts”.

The movie and TV industry popularized palms once they were firmly ensconced in Los Angeles. They became the most iconic image of the city, despite not being native to the area. Every red carpet and awards show included palm trees. The city’s population went from about 11,000 to over 1.2 million in just 50 years.

What is happening with Palm Trees in LA Today?

Some palm trees in Los Angeles are currently facing a decidedly dark fate. They are having problems with invasive insects and fatal fungus along streets and in parks. For this reason, the city has chosen to replace them with native trees that are shadier and more drought-tolerant.

We still don’t have the exact number of palm trees that have been lost over the years. Besides, experts say that we will see a decline in palm trees in the next 50 years, but they are still not sure by how much. Palm trees play a huge role in LA and the loss of them is particularly noticeable because of their prominence in the streetscape.

You can help to prevent the spread of threats to palm trees in the area. Just stay observant and look for signs of infestation. Take extra precautions even when you don’t notice any symptoms. Also, we recommend regular checks from your local arborist to make sure everything is fine. 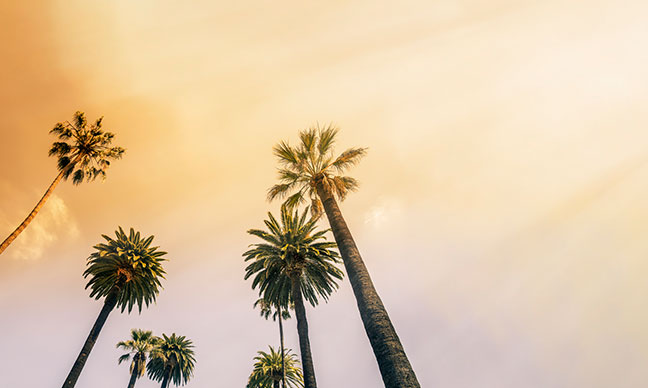 Q: What kind of palm trees are in Los Angeles?

A: Many different types of palm trees thrive in Los Angeles without any problems. The city planted palms from all over the world, and most of them succeed given enough water and sunlight. However, the Mexican fan palm seems to be the one palm tree that prefers the environment in the city.

Q: How many palm trees are in Los Angeles?

A: The official numbers we have dated from 1990 when the city of LA had about 75,000 palm trees planted. However, this number has declined over the years, according to officials. Still, we are not sure by how much.

Q: What is the street with all the palm trees in Los Angeles?

A: The famous palm tree street in Los Angeles is called Sunset Boulevard. This huge street is about 25 miles long, stretching from the Pacific Coast Highway to Hollywood. The street is named after the famous film and musical.

Los Angeles palm trees are a very important aspect of the city. They are the symbol of LA and they had a big impact on the development of the area. Many different varieties thrive without any problems, but we do notice an increase in pest and fungus problems in recent years. However, palm trees continue to thrive in LA with proper care and maintenance!