The palm trees in California were first brought by Spanish missionaries. Palm fronds were used for processions once a year, during Palm Sunday. Since then, it became a permanent fixture in the Golden State’s landscape. From public streets to private properties, it is common to see an attractive palm tree.

Today, it is easy for almost anyone to grow a palm in the garden. Nonetheless, you need to pay attention to regular care and maintenance to avoid a wide array of palm tree diseases, including those we’ll be talking about below.

Caused by a fungus called Fusarium oxysporum, this is usually spread by the use of infected pruning equipment. With this, if you need tree trimming California, it is best to rely on the service of experts who have sanitized equipment to prevent this disease.

The fungus carrying this disease can also stay in the soil and penetrate the palm tree through its roots. The spores will travel to the vascular system and attack the xylem. As a result, it restricts the water uptake of the tree. Because of inadequate water supply, it won’t take long before the trees will show signs of distress. Those in hotter parts of the state will die quicker.

There is no known cure for this disease, so the best thing to do is to execute preventive measures. As earlier mentioned, proper pruning using the right tools is necessary. If you have to prune, do it on days that are not windy to prevent the spread of the fungus. Dispose of any trimmings from the tree away from other potential hosts. When multiple palms are to be pruned, disinfecting the tools is a must. Providing supplemental water also helps, especially during drought.

The scale is often used to refer to insect pests. In the case of diamond scale, on the other hand, it is caused by a fungus called Phaeochoropsis neowashingtoniae. Some of the most common hosts include the California fan palm and Mexican fan palm. The diamond scale is a cyclical disease, which is common in the cool and moist seasons.

Like many diseases in palm trees, it reduces the canopy. The leaves eventually discolor and die. When you inspect the leaves closely, you will see diamond-shaped black fruiting bodies, which is also where the disease got its name. The length is anywhere from 1/8 to 1/3 inch while the width is 1/16 to 1/8 inch. You will find black and sooty dust on the infected leaves.

On itself, the diamond scale is not a lethal disease. However, upon infestation, it minimizes the vigor of the palm tree. It leaves the host vulnerable to other problems, which can result in more serious diseases.

One of the best disease management solutions is to choose a resistant variety. Some of the best options include Mexican blue palm, Australian fountain palm, Guadalupe palm, and Chinese windmill palm.

Improving the vigor of existing palms is also essential. Regular irrigation and fertilizing will help, especially during the times when they are more susceptible to infection.

Caused by Nalanthamala vermoeseni, pink rot is also one of the most common palm tree diseases in California. It results in a secondary disease that attacks weak and vulnerable hosts, including a king, bamboo, date, queen, and fan palms. This is also a cyclical disease, beginning its infection in winter and spring when the weather is more favorable for pest activity.

The symptoms of this disease are variable, which will be more evident in older and weaker plants. Spotting and rotting are the most common signs of infestation, which will show up in almost any part of the palm tree. Distortion, discoloration, and stunting are also common problems. More commonly, there will be pinkish spore masses, which is also where the disease got its name.

Certain environmental conditions can exacerbate the problem, increasing the chances that the host will die. Examples of this include excessive irrigation, insufficient drainage, improper nutrition, and planting palms too deep.

If the disease has not yet progressed too much, there are treatment options available. Systemic treatment can help, but it should be done as early as possible. While spraying a fungicide helps, on its own, it is insufficient. It must be complemented with other strategies, especially those focused on improving plant health. Regular fertilization is also helpful, especially as a preventive measure.

Technically known as Thielaviopsis rot, it affects the entire crown of the host plant. Considering that the crown weighs a lot, it is a significant safety hazard. To prevent damage to people and property, work with providers of tree removal services California to address underlying problems before the crown falls.

One of the biggest problems with this disease is that it is sudden, as the name implies. The crown may look green and healthy. Without warning, it can fall. Decay is often internally hidden in the crown. Considering how tall palm trees are, it is hard to go up and see if there is an issue that can eventually result in the crown drop. If you want to detect the disease, you can use a rubber mallet or similar tool. Tap the upper part of the trunk and listen to the sound. When there is a low and dull thud, chances are, it is severe and there is a possibility that the crown will drop anytime soon.

Proper pruning technique is the best defense against this palm tree problem. Skinning the bark of the trunk, especially near the leaf base, should also be avoided at all costs. If you have to trim the tree, disinfect the tools. Or better yet, leave the job to the pros to minimize the chances that you will be introducing more problems instead of bringing in a viable solution.

Palms are decorative because of their beautiful leaves. These leaves, however, can also be the subject of numerous diseases. Among others, one of the most common is leaf spot. It is caused by leaf-spotting fungi. The spots can be elongated or circular depending on the host and extent of the damage. With visual inspection alone, it is almost impossible to identify the fungi responsible for the problem.

The symptoms of leaf spot are similar to leaf blight. They are also often caused by the same fungi. All palms are vulnerable to this disease, especially in their younger years. At the start, leaf spot forms small lesions. These will eventually turn gray, brown, red, or yellow, resulting in discoloration of the leaf. There is a ring or halo that surrounds this lesion, which is also of a different color. The more the disease progresses, the more spots may appear in the leaves.

Water management is crucial for the prevention of leaf spot. Eliminate overhead irrigation as this makes the leaves susceptible to fungi. If possible, using rain protection also helps address the issue. The drier the leaves are, the less vulnerable it will be. Increasing air circulation is also important, which is possible by making sure that there is generous space between plants. More than improving ventilation, it also makes it more difficult for pathogens to spread to nearby plants. 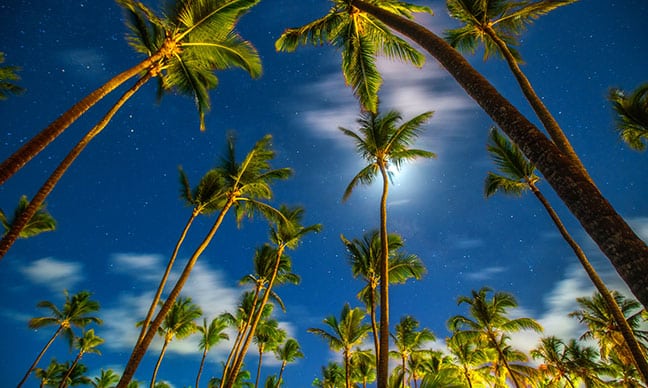 Before concluding this guide, allow us to answer a few questions you might have about diseases in palm trees in California.

Q: How do you treat palm tree fungus?

A: A fungicide spray is one of the most successful treatments for a palm tree fungus. It is most effective for addressing foliage diseases, such as blight and leaf spot. Immediate treatment is needed to get rid of the fungus before it spreads to the healthier parts. Tree removal California may also be warranted in severe infestations.

Q: What is killing my palm trees?

A: Aside from fungal diseases, pesky pests will kill your palm trees. In most instances, it is too late to solve the problem. The South American palm weevils are amongst the biggest threats. They are common pests in Canary Island date palms. It burrows into the leaf base and lays its eggs. The larvae move to the trunk and attack the core. If you do not remove the tree after the infestation, the crown will fall.

Q: How do I know if my palm tree is dying?

A: To know if your palm tree is dying, pay attention to its physical characteristics. Wilting, discoloration and stunted growth are some of the most common signs of dying. The fronds will turn yellow and the crown will also eventually drop.

Related Post: How To Revive A Dying Palm Tree

Palm trees give off a tropical and relaxing vibe. From the palm tree street in Los Angeles to the private neighborhoods in San Diego, they are everywhere in California. Despite their beauty, they are also prone to several palm tree diseases, such as fusarium wilt, diamond scale, and sudden crown drop. The best way to prevent these diseases is to ensure the vigor of the tree, making them less susceptible to pests and fungus that can bring serious health problems.

How To Grow And Care For Mulberry Tree California