Pecans are commonly grown all over Texas, for both commercial purposes and in private yards. Because there’s an increase in acreages of Pecans, Texas state tree is now facing major problems with diseases, weeds, and pests. The presence of certain insects and fungi is usually associated with most Pecan tree diseases, so learning about them is necessary to be able to recognize the symptoms.

In this article, we will talk about Pecan tree fungus and diseases that are the most common cause of tree decay. Besides, we will give you some tips on what you can do as prevention, so stay tuned!

Achieving optimal pest control in an ecologically and economically sound manner is one of the best things you can do for your trees. Reducing amounts of pesticides, production costs, and chemical contamination can be achieved with regular pest management, so we highly recommend hiring the nearest tree service Texas.

Additionally, it is suggested to regularly scout for Pecan tree diseases and monitor your trees for the presence of fungus and pests to be able to control them. Pecan nuts and foliage are usually subject to many non-parasitic and parasitic diseases, so these are the parts you should focus on. Now, let’s get into the types of diseases that Pecans usually deal with.

Scab is caused by the Pecan tree fungus called Cladosporium caryigenum. Overwintering stromata on nut shucks and twigs cause producing primary spores in the spring. These spores germinate on nut shucks, twigs, and leaflets during extended dew and rainy periods. As spores are released from lesions that form during early infections there are usually secondary infections that occur. Secondary infection spores are commonly produced during summer.

This disease is characterized by small, circular, dark, almost black spots on nuts and foliage. Sometimes, these spots will fuse and form large unsightly blackened areas. Left untreated, more susceptible cultivars are in danger of losing entire crops. Also, seedling and native trees may be lost during periods of extended dew and frequent rains.

To control the Pecan scab you will have to properly apply sprays of recommended fungicides in certain periods. We recommend the following recommended sanitary practices, or simply using resistant cultivars. Again, stay in contact with your local arborist if you notice any symptoms of this tree fungus Texas.

Vein spot is another disease caused by a common fungus Gnomonia nerviseda. It usually attacks the leaves of Pecan trees and seldom occurs on nuts or shoots. Lesions that this Pecan tree fungus causes are very similar lesions caused by the scab fungus, so it is frequently very hard to differentiate them.

However, lesions caused by Vein spot fungus are linear rather than round and are usually exclusive only to veins. Still, this tree disease Texas is usually not very serious and is easily controlled by available fungicides.

The Liver spot is caused by the fungus Gnomonia carya var. pecanae. One of the most common characteristics of this disease is reddish-brown spots on the lower side of leaflets. These are a circular and about five-eighths inch in diameter.

During the fall, these spots will turn cinnamon brown and start producing dark, small fruiting bodies. Besides, this is one of the Pecan tree diseases that will cause defoliation in humid areas, so hiring a tree service Texas is usually recommended to introduce a scab control program.

Powdery mildew is a disease that occurs sporadically and is caused by the fungus Microsphaera alni. It is rarely a serious disease in the Lonestar state. Usually, it occurs on nuts and foliage and is visually characterized by superficial powdery white growth.

A common sign of early Powdery mildew infection is small nuts and shriveled kernels, as well as early shuck split. Sometimes, this Alvin tree pest will cause defoliation and further complications if left untreated.

When a scab control program is followed there are usually no problems in holding back the disease from progressing further.

Rosette is the first disease on this list that’s not caused by a Pecan tree fungus. This disease is caused by zinc deficiency and can be quite a problem. Usually, the main cause for zinc deficiency is low zinc and alkaline soils that can commonly be found among the variety of Texas soils.

Left untreated, the condition will cause leaves to become twisted and turn reddish-brown if nothing is done about the disease. Additionally, small limbs and twigs will die and the dieback will usually begin from the top of the affected trees.

Eventually, the large limbs will die, as well as the tree. Hopefully, treatment for this problem is very straightforward – apply a zinc sulfate or zinc chelate formula to the soil. You can also spray the tree with these onto the foliage. Spraying requires less material and quicker response, so consult with your local tree expert to determine what would be the best in your case.

Bunch disease is caused by obligate bacterial parasites called Phytoplasmas, which is unlikely for other Pecan tree diseases. This disease is easily identified due to the bushy growths of slender willowy shoots that it causes.

The symptoms may appear on the whole tree or just on a single branch, so careful monitoring is necessary. The disease shoots leaf out earlier than those that are not infected, so this disease is very conspicuous in the spring. Most tree experts believe that the pathogen is transmitted by some of the Arlington tree pests, probably leafhoppers or borers.

Hypoxylon canker is a disease caused by the fungus Hypoxylon atropunctatum and is one of the most common tree diseases in Fort Worth. Usually, it occurs in Oaks, but the disease has also been found in Pecan trees recently. It is characterized by a reddish powdery substance formed under the bark and sloughing off of bark. Still, this condition is commonly confused with the normal powdery material that forms under the bark frequently. On infected wood, there will usually be a chocolate brown-to-black substance formed, which is one of the few signs of a sick tree.

Stressed trees, especially those that require water, are more likely to attract this disease and develop serious symptoms. The bad news is that there is nothing you can do to control the fungus once it already infects your trees. However, preventing the infection is the key to saving your trees.

Make sure to maintain a proper balance of water in the root system, prevent compaction of soil around your trees, paint over wounds, and avoid cultivation around trees. Also, if you regularly fertilize your trees you will minimize the chances of this disease and maintain a satisfactory rate of growth.

Like most tree diseases, twig dieback is also caused by a fungus. The fungus that causes this disease is named Botryosphaeria berengeriana and is commonly found throughout Texas and other southern states.

The disease is most often found on limbs that are under a lot of stress, usually caused by lack of water, damage, or the presence of other fungi. Besides, excessive shading, drought, foliar pathogens, scab defoliation, and over-production can all stress the tree. More seriously infected limbs can die back even to 30 inches and cause serious damage to the tree.

The dieback will occur all over a tree except under heavily shady conditions, where the dieback will happen only in those heavily shaded areas. We recommend hiring a tree pruning Texas company to control dieback. Deadwood needs to be pruned and destroyed, moved away from the site. If possible, determine the cause of stress and correct it as soon as possible.

Similar to Bunch disease, Crown gall is also caused by the bacterial pathogen. Agrobacterium tumefaciens is very common in Texas and is the main cause of this disease. This bacteria will cause tumor cells to develop and become wart-like growths of tissue.

At first, these tumorous growths can easily be confused with callus tissue. However, as the disease progress, these growths will become dark, rough, and round. The main problem with this bacteria is that it can survive in the soil for several years. The bacteria enter Pecan stems or roots through wounds that are usually caused by cultivation, grafting, or insects.

Once the galls are formed, they will reduce tree vigor by retarding the important nutrients and water in the vascular tissue. The external parts of the galls will eventually slough off as they deteriorate from lack of water. Unfortunately, these tissues contain bacteria that will just be reintroduced into the soil, so you may need some help from a professional.

The Downy spot is another Pecan tree fungus disease. It is caused by Mycosphaerella caryigena and usually causes early leaf loss on more susceptible cultivars like Moneymaker, Pawnee, and Stuart. Repeated defoliation will eventually cause tree vigor and a decrease in nut production.

At first, this disease will appear in late spring on the lower surface, usually on young foliage. Usually, it begins in the lower parts and spreads upward. It is characterized by small, yellow spots that turn white once the spores are produced. The lesions turn brown later in the season and they begin to appear on the upper surface of the leaf too. Leaves that are infected heavily will drop earlier than healthy ones once the fall comes.

One of the reasons why it can be very hard to deal with this disease is the fact that Downy spot survives in fallen leaves during the winter. This is why we recommend either using tolerant varieties like Western, Mahan, or Success or consulting with your local arborist about the disease. 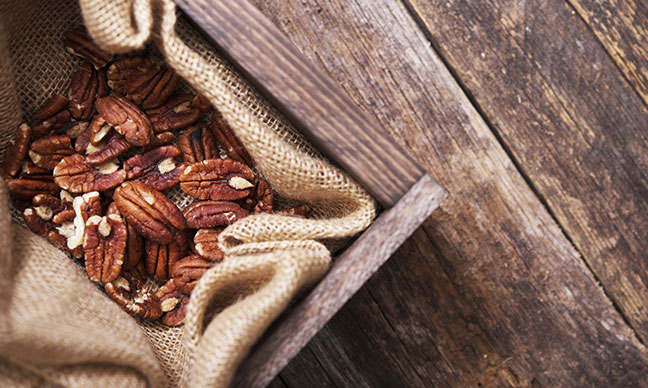 Q: How do you treat pecan tree disease?

A: One of the most effective ways to treat Pecan tree diseases in Texas is by spraying fungicides. In some cases, the tree needs to be sprayed multiple times to fight off the disease. Also, following simple prevention rules like watering, painting over wounds, and pruning can decrease the chances of even developing most diseases.

Q: What diseases do Pecan trees get?

A: Usually, most Pecan diseases in Texas are caused by fungus. Some of the most common diseases are Scab, Vein Spot, Liver Spot, Powdery Mildew, and Twig dieback, . Besides, bacterial diseases are also quite common in Pecan trees. All of these diseases require attention and patience to deal with.

A: Pecan Scab probably won’t kill your Texas trees, but it can significantly weaken them. The Scab fungus causes initial damage in the spring when it starts attacking young leaves. During summer, it will move into the nut shucks. Eventually, the disease can cause complete defoliation on your Pecan tree.

Q: Why are the Pecans on my tree rotten?

A: Pecan trees in Texas usually rot due to the fungal species that cause rotting diseases. Usually, the shuck will turn into a mushy mess and make nuts inedible. It is very important to react as soon as you notice the first signs of rot and deal with it as soon as possible.

Q: How do you treat phylloxera on Pecan trees?

A: The best thing you can to do treat phylloxera on your Pecan trees in Texas is to spray a horticultural oil solution. It should consist of 10 tbsp oil per gallon of water. Make sure you thoroughly wet the smaller branches, limbs, and trunk before bud break.

Pecan tree diseases are, in most cases, not deadly or very harmful. You can usually deal with them with fungicides, fertilizers, and prevention techniques. Make sure you stay in contact with your local arborist if you notice any symptoms mentioned in this article. We hope your trees will stay healthy!

Fall In Houston: Where To See Fall Colors