Most Popular Types Of Pecans In Texas

With over 1,000 varieties of Pecans, it can be quite hard to determine which one is the best on your own. Due to their unique characteristics, each pecan variety is different and has found its use in nature. The chances are you already have some of the types of Pecans in Texas we will talk about, planted in your backyard. If not, you will learn about different varieties of the Texas state tree to plant in this article.

Popular Types of Pecans in Texas

The Burkett variety was initially discovered in 1900 by the sons of J.H. Burkett, a pioneer in Pecan culture. Unfortunately, the original tree was destroyed by competition and Mr. Burkett had to disseminate scions almost a decade later. However, this Pecan variety used to be the most profitable and popular cultivar in Texas at one time. The variety is also used in breeding and two cultivars – Comanche and Apache.

It has a round-shaped nut and is usually compared to a large hickory nut. There aren’t too many types of Pecans in Texas with a high percent kernel as in Burkett, but flecking on seed coat reduces it. Burkett is a spreading tree and has nuts that are frequently split at the suture. Additionally, this pecan is resistant o most tree diseases Texas.

Cheyenne is a variety of Pecan varieties Texas that was released in 1970 by the USDA. It produces very valuable nuts that shell out wrinkled, bright, and perfect halves. Besides, this Pecan remains a very popular cultivar for uses that require perfect shelled halves. The tree matures about mid-October and has an expected nut yield and size of 59% kernel and 58 nuts/lb.

As already mentioned, Cheyenne is a mid-season tree but it also has a natural resistance to tree fungus Texas, and aphids (number 1 pecan pest). Still, experts don’t fully understand the resistance profile of this tree, and further research is required.

Kiowa variety was developed in Brownwood in 1953 as a cross of Odom x Mahan. However, DNA and isozyme analysis rule the “Odom” pollen parent out. New research indicates that it is more likely to be the cross of Desirable x Mahan.

The new Kiowa variety still used today was originally released in 1976 by the USDA and is known for producing high-quality nuts with a high % kernel. The nuts are usually larger which could be the cause of the late-maturing (early November). If you desire a larger nut, Kiowa is probably one of the best Pecan varieties Texas for you. Check with your local arborist about the pecan tree care tips Fort Worth.

The expected yield and nut sizes are 58% kernel and 45 nuts/lb.

Originally, the Pawnee variety was made in Brownwood from a cross of Starking Hardy Giant x Mohawk. The USDA officially released this variety in early 1984 and it has been commonly used in Texas since then. The tree produces medium-sized pecans with a very high % kernel. Its unique characteristic is that it produces pecans earlier in the season and they are usually already ready for sale in late September.

Tree services Texas recommend Pawnee variety for people who want new-crop pecans as early as possible when the harvest season comes. Besides its early maturing characteristics, Pawnee is also desired for its looks and high kernel values.

The expected yield and nut sizes are about 58% kernel and 50 nuts/lb.

Choctaw is a variety that originates from a cross between Mahan and Success. Originally, it was made in Brownwood in 1946 but was officially named and released in 1959 as a sib of Mohawk. Of course, the cultivar was very different back in the days from what it is now, but the values are mostly the same.

This is one of the Pecan varieties Texas that require high maintenance. The tree requires proper management and perfect soil to thrive and produce a reliable crop. However, if you manage to carefully nurture your Choctaw Pecan you can expect signs of a healthy tree Fort Worth, beautiful foliage, and flavorful, high-quality, large nuts.

The expected yield and nut sizes are about 27% kernel and 55 nuts/lb.

Supposedly, this is one of the first pecan varieties developed by a controlled cross. Tree service Texas companies are still unsure of the parentage but it is speculated that it may be Jewett x Success cross. Since 1992, this variety has been the number one cultivar in orchards, which is reassuring for many new gardeners.

This cultivar is perfect for landowners in Central, South, and East Texas who usually experience humid climates. One thing to keep in mind before planting is that this tree takes about a decade to start bearing nuts. This may be a downside to some gardeners, but more experienced Pecan owners say that it is worth waiting for the nuts.

The expected yield and nut sizes are about 51% kernel and 45 nuts/lb. 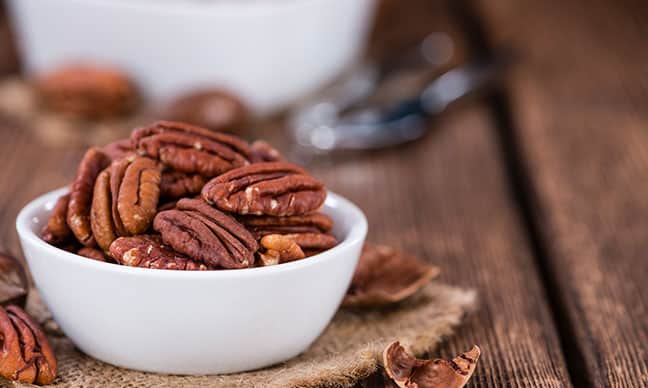 Q: What is the best pecan tree for Texas?

A: The most productive pecan grown in Texas is Wichita. This variety is ideally adapted to the west and central Texas. Besides, the tree is very vigorous even though it has some scab and freeze problems in certain areas. It begins to bear in about 5 years and is considered to be very productive.

Q: How do I know what kind of pecans I have?

A: There are two main distinctions when it comes to the difference in Pecan varieties in Texas. Those distinctions are the thickness of the shell and the size of the nut. Usually, “wild” or native Pecans have smaller nuts and thicker shells than improved varieties.

Q: Is Texas known for pecans?

A: Texas is known for Pecans since these trees are native to the state’s river valleys. It is native to about 150 counties and one of the most widely distributed trees in the state. Also, it is the only commercially grown nut in the state and has a wide use.

Q: How do you identify a Pecan tree in Texas?

A: To identify a Pecan tree in Texas you will have to consider the shape of the branches. According to Texas A&M, a couple of varieties of Pecan trees in Texas have a noticeable, natural “V” shape to the branches. Common varieties with “V” shaped branches include Wichita and Desirable.

Q: Do you need 2 pecan trees to produce nuts?

A: Pecan trees do not bloom at the same time, but they do have both female and male flowers. Still, this means that Pecan trees need to grow in pairs to produce nuts. Since they can’t pollinate themselves, they also can’t be the same “type”, so keep that in mind before planting.

When it comes to types of pecans in Texas, there are different varieties and each has its unique characteristics and values. In the end, it all comes down to a personal preference, but you can always opt for the varieties that are more common among owners. Consult with your local arborist to learn more about planting, maintenance, and caring for Pecan trees!

Best Trees To Plant In Fort Worth